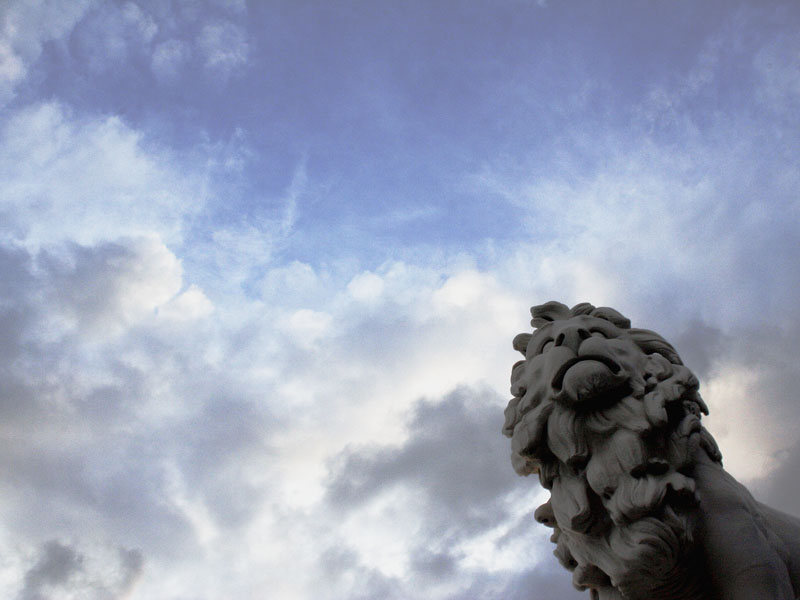 I’m loving these summer skies, it makes for dramatic photography.

The South Bank Lion is situated outside County Hall, next to Westminster Bridge.

It’s 13 feet long, 12 feet high and weighing 13 tons. The paw bears the date 24/5/1837 and the initials WFW. The original red colour has been removed to show the Coade Stone underneath. It now stands on a plinth bearing a plaque which briefly outlines the Lion’s history. The second, smaller Coade Stone Lion, which also stood on the Brewery is now placed outside the entrance of Twickenham Rugby Ground.

Originally stood on the parapet of Red Lion Brewery. When the bomb-damaged Brewery was demolished to make room for the 1951 Festival Hall, the Lion was saved at the request of King George VI and moved to the entrance of Waterloo Station. When the Station was expanded in 1966 the Lion was moved to its present location, Westminster Bridge and renamed ‘The South Bank Lion’. When the Lion was moved from the top of the Brewery, a time capsule from 1837 was found in the recess of its back: a bottle with two William IV coins and a Coade Co. calling card. This was replaced with a 1966 coin and articles about the Lion’s history.